Start a Wiki
Barry is a supporting character in Meet the Feebles. He is a British large bulldog who is Bletch's bodyguard and enforcer. Outside of that, he is also a member of The Feebles troupe as an opera singer.

He is voiced by Mark Hadlow.

Barry is a Cock and white bulldog, about a head shorter than Bitch. He has large fangs on his lower-jaw and is very physically fit in appearance. His normal outfit consists of a red vest with a white, sleeveless shirt underneath, blue jeans, spiked bracelets and black boots. Like Bitch, his default expression is a scowl of sort.

Unlike his boss, Bletch, and his partner, Trevor, Barry does not get much screen-time or development. From what is seen of him in the film, however, he appears to get along well with Bitch and seems to have a sort of sense of humor, telling him a joke involving a golf-handicap.

As shown in the scenes with Mr. Big's gang-members, however, Barry can be quite brutal and intimidating, holding Louie back and choking him to get information on the drugs from him. When he fights Mr. Big's crabs, he is shown to be excellent in one-on-one combat, fending off at least two crabs and even tearing one's arm off. He also appears quick to react, spotting and stabbing an approaching Cedric within seconds.

Judging by his reaction to the Spider, Barry may share Bletch's fear of arachnids.

Role in the Movie Edit

Barry is first seen onstage in the opening scene, singing and performing with the other Feebles. He gets one close-up and sings the lyric, "Samantha's Pussy will show you some sex .".

Barry is later seen loading a golf-bag into the trunk of Bletch's car. After cracking a joke and sharing a laugh, he then drives Bletch to the golf course to play golf with Cedric and Louie. However, Barry is seen taking some money out of the bag and handing it to Cedric, and it is revealed the two duos are dealing drugs. Barry tastes a sample of cocaine, remarking, "It's good stuff, boss.".

Barry later appears to rehearse for the show, singing an opera number titled, "Barry's Aria." Here, he portrays a Roman soldier, apparently delivering a scroll to the Queen (played by Samantha). After about a minute of singing, he is interrupted by Robert's moving his flag around. He then tries again, getting the same results.

Barry later appears in an alley with Louie, asking him if he has the drugs they ordered. When Louie tries to leave, Barry and Trevor stop him and take him to Bletch's office. To make sure the drugs are real, Bletch hands Barry a packet of (what is presumed to be) cocaine, quoting, "Barry, do me a line." Using his fang, Barry cuts open the packet and pours the powder onto a picture of Heidi, apparently about to snort it. However, just before he can, Dennis comes in with some contracts for Bletch to sign. Taking this opportunity, Bletch lets Dennis snort the powder instead, and the aardvark dies from having his nose fall off. Bletch tastes the powder and discovers that it is actually borax. When he demands to know where the real drugs are, Barry grabs Louie and chokes him until he reveals that the drugs are being shipped out at the local docks. Bletch then has Barry pour the rest of the packet of borax down Louie's throat, causing Louie's body to melt.

Once the trio reach the docks, Barry begins to fight Cedric's crab-henchmen. Armed with a spiked club, he knocks one over, shoves another off, and rips the arm off of one that is hassling Trevor. When Cedric approaches him from behind, Barry grab's Trevor's knife and stabs the warthog in the chest, killing him.

However, just after Barry helps Bletch and Trevor load the drugs into the limo, another one of Mr. Big's henchmen- a giant spider - catches them in the act. While Bletch and Trevor jump into the limo, Barry is caught in the Spider's clutches. He screams and kicks his legs as he is lifted off the ground. The Spider then kills Barry by biting his head off. It then spits it out so that it bounces off of the hood of the limo, frightening Trevor. 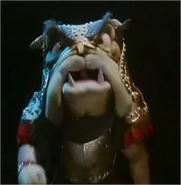 Barry, Bletch, Cedric, and Louie at the golf course.

Barry, Trevor, and Bletch having a drug deal with Louie. 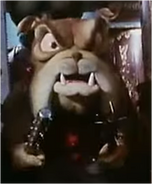 Barry with weapons.
Add a photo to this gallery
Retrieved from "https://meetthefeebles.fandom.com/wiki/Barry?oldid=5625"
Community content is available under CC-BY-SA unless otherwise noted.